Working with a group of clients this week, we focussed on how to get to the point.

To stop faffing about with

It’s not likely what you’re used to doing AND it really works.

Imagine a pyramid as it normally looks .  Big part of the structure at the bottom and it works up and up to to tip – or point – of the pyramid.

Most people start this way with the point at the end ie the top  “details, details, what you have to understand, and another thing, blah blah and eventually get to the point. (or might do).

We tend to explain situations, issues, challenges in this way.

It takes time.  It takes energy and it can be – frankly – boring and we might not actually get there….

People don’t necessarily know what you’re talking about and are waiting (and often silently praying) for you to get to the point.

So, my suggestion is to get to the point by using the Inverted Pyramid.

I read about this in a great little book called The Unwritten Laws of Business by W J King.  The idea is to think about how you get your point across like a pyramid on its head. 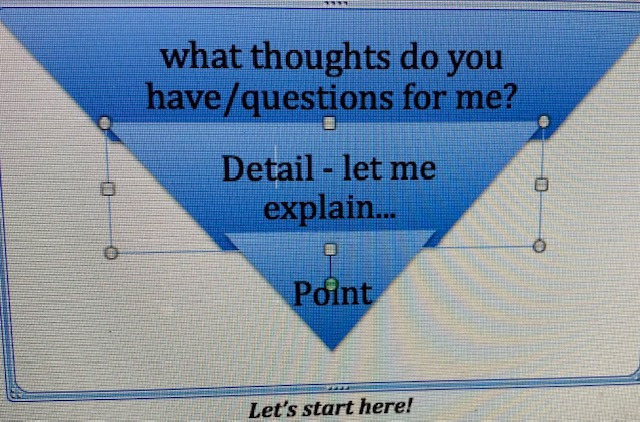 This works just as well at home as it does at work .  It also works in writing as well as verbally.

Starting with the point makes you make yourself clear or clearerabout what it is you have to get across.

So many people don’t really know what they’re trying to say and they hope they’ll find out as they’re speaking!  Argh.  And we have to listen to them…

Don’t be one of those .  I had a tendency to do that back in the day.

No more.  Too much time, energy and too much room for misunderstandings or disconnection.

Douglas and I are somewhat morphing into each other!  I wanted so much to find a blonde, hairy Lurcher and maybe – looking at this photo – I manifested him and myself into one! 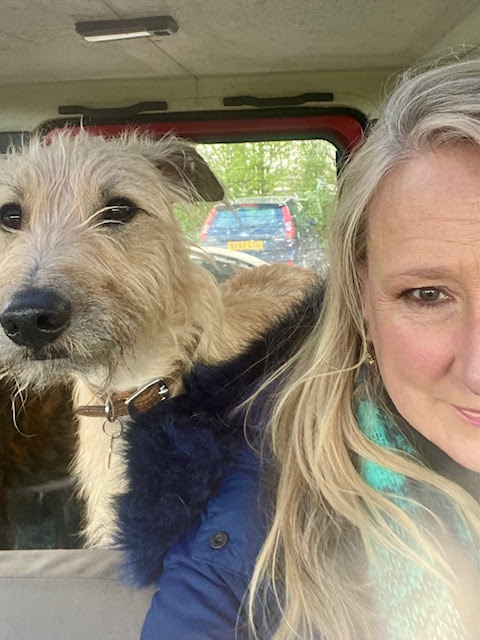 ← You just don't know The Trapeze →